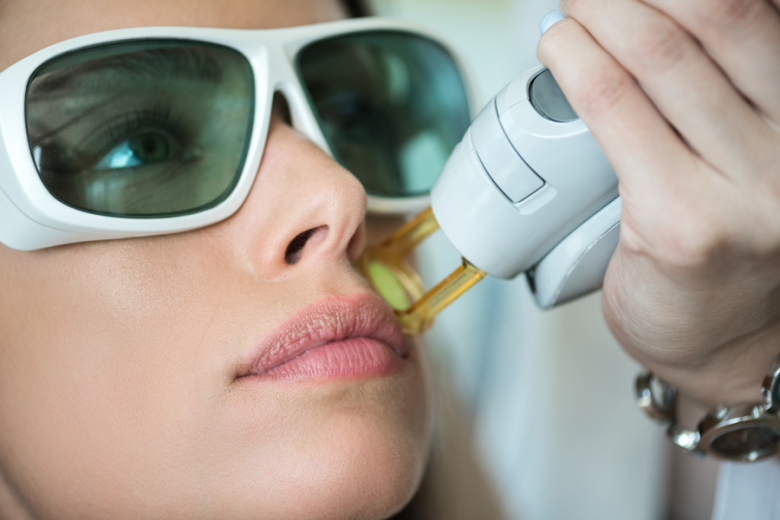 Three women have appeared on national TV to reveal the “excrutiating pain” caused by a laser treatment they each had at a Victorian beauty salon and how it left their faces bloodied, swollen and inflamed for weeks.

Deb Collins, Michelle Abery and Niki Richardson all received the Erbium-YAG laser procedure at a clinic on the Mornington Peninsula that has since closed.

The women, who shared their story with Seven’s Today Tonight expected the treatment to leave them with smoother and rejuvenated skin. Instead, they say their faces were swollen and bloodied for weeks.

Deb Collins said she and her friend Michelle were told by the beauty therapist that there would be “no bad after-effects” and that it would “feel like a bad sunburn” [but] we wouldn’t have to wear makeup afterwards.

“[The therapist] applied a lot of high pressure on a very high setting,” Deb said. “Our faces were bleeding, there was blood running down on our faces and on our sheets, in our hair.”

She consulted with a plastic surgeon following the procedure and was told she had third degree burns.

Michelle and Deb filmed the woman and her training assistant performing the treatment, their bloodied faces visible in the clip.

The woman can be heard in the clip saying “I’m a bit more brutal”, and telling one of her patients that “you may have a lot of swollen glands”.

Added Niki Richardson, who had the same treatment: “There’s no words to say how excruciating it was. My whole body was convulsing.”

She says she suffered with severe inflammation three months after the procedure.

Professor Mark Ashton, president of the Australian Society of Plastic Surgeons, warns: “If you’re using a class 4 laser [as the erbium is] and you don’t have training, you can do a lot of damage and create a lot of scarring very quickly indeed.

“If they’re using something that’s causing a lot of bleeding, that means they’ve gone through the top layers of skin and into the blood vessels.”

Prof Ashton said a plastic surgeon performing the procedure would have been using an anaesthetic or heavy sedation as well.

WHO CAN USE LASER DEVICES

Only doctors are allowed to use a laser in Western Australia and licenses are required in Queensland and Tasmania.

Yet almost anyone can own and operate a laser in other states and territories, even with no training, experience or qualification.

“These people are not under the oversight of an overarching State or Federal government, so the opportunity to prosecute, fine or discipline that person is limited as it currently stands,” Prof Ashton says.

Says Brisbane cosmetic physician Dr Mary Dingley, a spokesperson for the Cosmetic Physicians College of Australasia (CPCA): “Unfortunately, when all you have is a hammer, everything looks like a nail.

“It seems that these days, many people treating skin will try the device they have on any condition without actually knowing what the condition is, whether the device is appropriate for that condition or whether it should be treated with any device at all.

“Also, the person making that `diagnosis’ needs to be able to take responsibility for that diagnosis, explain the course of treatment, any possible side effects and complications, treat such complications should they occur and, worst case scenario, carry insurance in order to compensate the treated person in the event of unfortunate, irreparable results.

“For most conditions, a doctor who focuses in this field is best placed to provide this diagnosis and advice.

“There will be conditions where the actual treatment may be delegated to a trained laser operator once a diagnosis has been made and treatment parameters set.

“Should problems occur, the doctor will be alerted and take over treatment of any side effects and complications.

“Not all doctors have training and experience in laser medicine although most will have diagnostic ability concerning skin conditions.

“To know how and when to use lasers or other energy-based devices, however, one needs to consult a doctor with training and experience in this field.”

Dr Dingley points out that the Australian Radiation Protection and Nuclear Safety Agency (ARPANSA) conducted a review and asked for submissions from the medical and beauty industries. It felt it didn’t get enough evidence to recommend legislative change.

Surprisingly, one of the stated reasons was that no public submissions were received. ARPANSA was then going to make some educational literature for public information but this has not been forthcoming to date.

WHAT IS ERBIUM LASER

According to Dr Dingley:

The erbium (or erbium-YAG, to be precise) laser is an ablative laser which means that it vapourises tissue rather than coagulates it.

It may be fractionated or `traditional’. Traditional erbium lasers will vapourise the full surface of tissue to which they are applied, effectively going down into the skin in layers.

Healing then occurs by skin cells from the hair follicles spreading over the skin’s surface, producing a `resurfacing’.

If the laser goes too deep and also vapourises all the follicles then there are no surface skin cells left to resurface the skin and scarring occurs.

Fractional erbium lasers also vapourise tissue but do so as columns (effectively producing holes) which can actually go down deeper into the skin than traditional, full-surface erbium lasers as intact skin is left among all these columns and healing is by a different method which occurs very quickly. This means open wounds seal much more quickly and recovery time is less than with traditional resurfacing.

Fractional resurfacing is used more frequently these days than traditional resurfacing, however the full surface resurfacing is still used for levelling raised skin lesions such as some moles and some very badly-damaged or very stiffly wrinkled areas, such as around the mouth, in fair-skinned individuals.

Fractional resurfacing is used for generally improving skin texture usually over larger areas for issues such as general solar damage or acne scarring.