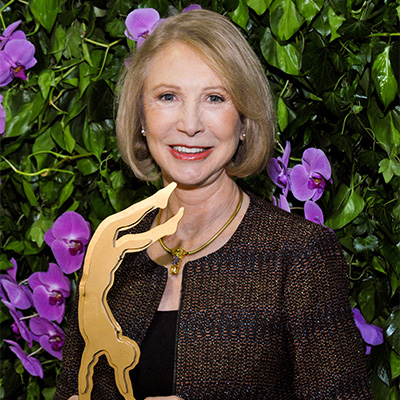 The award is presented each year to someone in the spa industry who has made significant contributions to both the definition and positive movement of health and wellness over the lifetime of their career.

Jane is recognised for enhancing the lives of women by being the first to supply the aesthetic industry with a full line of makeup that was good for the skin.

With a background in film, theatre and TV, she witnessed the negative effects that makeup had on models and actresses. She introduced her first mineral foundation, Amazing Base, in 1994, providing a makeup that nurtured skin and forever changd the landscape of the makeup industry.

With distribution rooted in spas, salons and medical clinics, jane iredale has flourished into a full line with more than 400 items distributed to more than 40 international markets.

Jane was presented the award by Michael Tompkins, ISPA Chairman, and Heather Thompson, Creator of Yummie Tummie (above).

‘There’s no greater accolade than being recognised by the people who inspire you, and you have always inspired me,’ she said as she addressed conference attendees during her acceptance speech.

Jane paralleled the evolution of ISPA and the Visionary Award with the growth of her own line, which celebrates its 20th Anniversary this year. 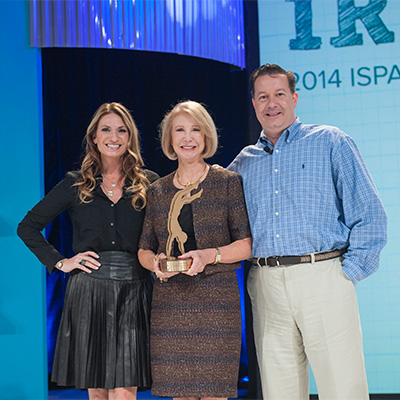 ‘It was the Oaks at Ojai, in the persons of the great Sheila Cluff, the first recipient of the ISPA Visionary Award, and her ever-inventive makeup artist Linda Winn, who gave me the confidence to think that I should keep going … one spa at a time, one esthetician at a time.’

She encouraged all attendees to embrace their roles as advisors to the word of wellness by upholding ISPA’s global best practice of sustainability, which maintains ‘It is the spa’s purpose and responsibility to work with the natural world to promote its healing properties while conducting business in a way that sustains the life of the planet and thus humanity.

‘For me, it means running a company where we take pride in the products that leave our warehouse, where our partners are appreciated, where our employees are cared for, and where our footprints on the environment are as light as we can make them. And we’re proud to be part of an industry that’s doing the same.’