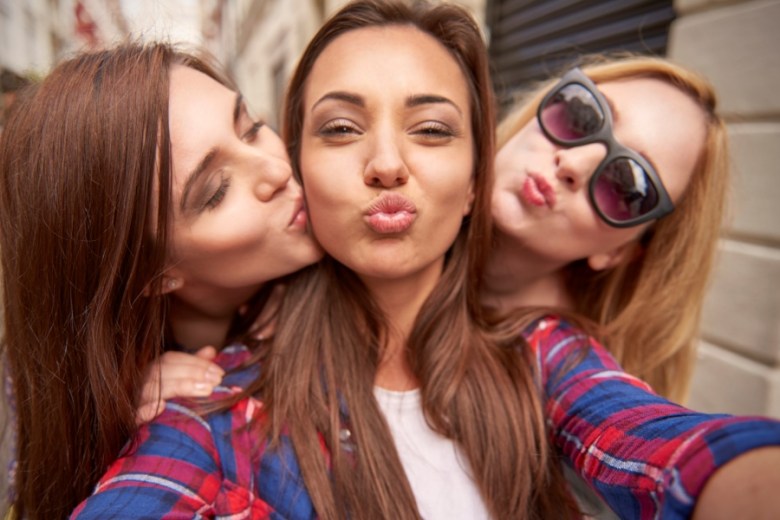 One in three facial plastic surgeons saw an increase in requests for procedures due to patients being more self aware of looks in social media, according to a study conducted by the American Academy of Facial Plastic and Reconstructive Surgery last year. And the trend is well and truly mirrored in Australia.

Taking selfies (the word “selfie” was even elected “Word of the Year 2013” by the Oxford English Dictionary) has been connected to a lack of self-confidence, particularly in the young. The rise of “digital narcissism” is said to put enormous pressure on people to achieve unfeasible goals – such as emulating perfectly primed and posed celebrities – interacting with a distorted reality built largely around social media networks.

“This obsession with ‘selfies’ is definitely showing its influence in a significant proportion of facial plastic surgery consultations,” says Dr George Marcells*, president of the Australasian Academy of Facial Plastic Surgery.

“In their first consultation, prospective new patients will often show me photos on their smart phone or iPad that may also have been featured on their Instagram or Facebook profiles.

“They are often hypercritical of their perceived flaws and, in particular, how they appear in these photographs.

“Selfie shots are usually taken close up and that tends to fish eye or distort facial features.

“For this reason, after listening to my patient’s concerns and viewing any of their selfies or social media snaps, we move on to look closely with a mirror. Then we take formal patient photos from different angles in the clinic setting, in order to provide more accurate feedback.

“In some cases, people have been surprised to discover that in fact their noses haven’t grown overnight.

“For anyone obsessed with taking selfies and who is concerned simply with looking better on social media, purchasing a selfie stick may be the answer.

“The right distance, angle and lighting can make a world of difference, and in some cases save the time, recovery and cost of a surgical procedure.”

Dr Marcells says that while the increasingly image-based nature of our world can promote a higher level of critiquing, those who are genuine candidates for undergoing facial plastic surgery are likely to have experienced discomfort or self-consciousness about their appearance for some time.

“For these people, the lens of social media may give them extra impetus to make the first call to a surgeon,” he says.

“No matter what the initial motivation is, it is important to see only a surgeon who is well qualified, ethical and experienced in the procedure that you may be interested in undergoing.

“With the appropriate level of expertise, and having seen hundreds of patients for a variety of facial concerns, I am able to firstly identify and clarify in a consultation the best course of treatment to address the issues.

“This includes firstly understanding the psychological and emotional motivations, examining any structural issues, and addressing the aesthetic with an appreciation of balance and harmony.”

Facial cosmetic surgeon Dr William Mooney says he has seen a significant increase in ever-younger patients (under 25), both male and female, presenting for surgery consultations with very minor problems or irregularities at his practices in Sydney’s Bondi Junction and Bankstown.

“Often these are perceived irregularities that I would not operate on,” Dr Mooney says. “This has been the result of the explosion of Instagram and uber-bloggers over the last five years, where people are using their image to self brand.

“Attractive photographs attract more likes, which can convert to more business or income if you are using your self or image as a brand – which so many of the younger generation are.”

Dr Mooney believes body dysmorphia is on the increase as a result of the selfie generation and their fascination with taking photographs of themselves.

“This increase in self portraiture causes us to focus more on our appearance and competitively compare with others in an unhealthy way,” he says.

“If I believe a patient could be possibly dysmorphic I will always turn them away or offer non-surgical solutions if appropriate. If it is warranted, I will also possibly refer to a psychologist who can help the patient understand what is happening for them.

“There is no denying that people across the board, the younger generation and also even the older Baby Boomers, are becoming more self conscious because of the rise of social media and the selfie phenomenon.

“Even if you’re not a huge fan or user of social media there is a definite increase in the pressure to look your best, whether on or offline.

“People are starting to notice more their minor facial imperfections such as that bump in their nose or facial asymmetry or the lines on their forehead.”

Dr Mooney suggests that learning how to photograph well and pose is a huge advantage.

“Ask any model and they will tell you there are secrets to photographing well,” he says. “Keep in mind that the nose will always look bigger in close-ups and all seflies are actually close-ups.

“Selfies are also often shot from below – so the neck and jaw can look saggier than it actually is. Its actually very easy to take a bad selfie. So learn your angles and lighting that work best and work with that instead.

“The most important feature for an attractive person I always say is happiness. Beauty really does emanate from within. Working on a positive relationship with your self, fostering your self esteem from within rather than without, along with a good diet and exercise is far more valuable than the effect you will ever get from surgery.

“As a side to this we really encourage our patients at Face Plus Medispas is to focus on skin and wellbeing as two of the easiest non-surgical things they can do to improve their appearance.

“A glowing visage is really one of the most effective ways to look luminous and great in pictures. Skin is in. I urge people to think about non-surgical options first, such as lasers for collagen induction therapy and skin rejuvenation treatments. These are by far more affordable and less intrusive solutions for everyone.

“I would also encourage the rampant selfie taker to have the confidence perhaps to put their camera phone down and get out there and share their beauty inside and out in person!! That’s the real secret to happiness and feeling good – real connections with others.”

A follow-up study of 2014 data stated that the “surge in self-awareness and an increase in requests for aesthetic procedures (especially in the under 30 set) sired by selfies […] shows no sign of declining.”

US plastic surgeon Dr Marc Mani, based in the celebrity hub of Beverly Hills, says: “I have noticed more people becoming obsessed with the way they look in their selfies.

“When we see ourselves in pictures, we notice more things that we may want to change, as opposed to looking in the mirror.

“The selfie obsession has fed into this and made more people come in asking if plastic surgery can help them.”

Dr Mani says that among his patients, the nose and neck are the two body parts patients have been most concerned about due to the way they look in their self-taken photos.

“The nose looks bigger in close-ups, and all selfies are close-ups, so they think it should be smaller. Since selfies are often shot from below, the neck looks either fatter or saggier from that angle.”

However, Dr Mani does not believe that the selfie craze is leading people to get excessive cosmetic procedures, but rather that it is just bringing already underlying insecurities to the surface.

“The desire to take a perfect selfie may push someone to have plastic surgery, but I think people who are obsessed with selfies are often insecure and lacking in confidence,” he adds.

“Plastic surgery is intended to boost self-esteem by enhancing confidence, so if it’s done right, maybe the selfie-taker will have the confidence to put down their camera phone and share their beauty in person!”